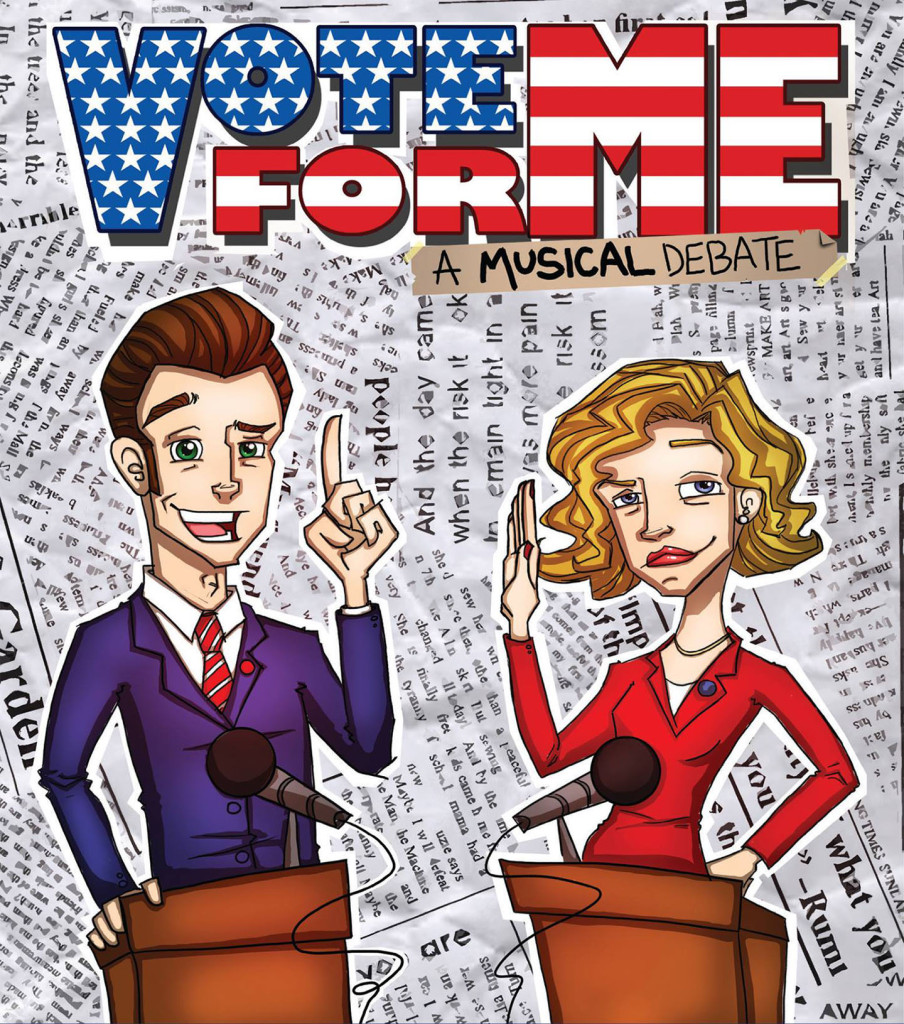 “A landslide victory” … Humour by the bucketful … Bright, funny and totally refreshing … I vote for this production as a sure-fire winner.”
http://theatresoutheast.com/vote-for-me-london-theatre-workshop-review/

Musical Theatre Review:
“There’s no need for a recount on this one, it’s a wide-margin winner.”
http://musicaltheatrereview.com/vote-for-me-a-musical-debate-london-theatre-workshop/

The Public Reviews:
“The perfect cathartic antidote. A slick, funny, timely night that gleams with wit and good performances.”
http://www.thepublicreviews.com/vote-for-me-a-musical-debate-london-theatre-workshop-london/

Official Theatre:
“Four and a Half Stars. 90 minutes of fast paced electioneering that ranges from caricatured stately speeches behind podiums, to brutal matches in boxing rings, to sassy tap numbers and an all out mental moment with some flags. Yep, theatrical chaos like that presented in Vote for Me is the reason I love musicals.”
http://www.officialtheatre.com/fringe/vote-for-me-review-and-cast-qa-london-theatre-workshop/

A Younger Theatre:
“What I liked so much about this show, other than everything I’ve already mentioned, was that the comedy wasn’t only there to entertain. We were not only there to laugh at the extremes of politics but to listen to an important point…this show is not one to miss. I came out beaming at what I had just witnessed; from the book to the music, from the creative to the cast, this is an astounding fringe production and I expect big things for everyone involved.”
http://www.ayoungertheatre.com/review-vote-for-me-a-musical-debate-london-theatre-workshop/

Ginger Hibiscus:
“Vote For Me proved itself to be more than just an antidote for the most recent election; it showed itself to also be a hysterical deconstruction of political positioning, spin doctors and their “unique fact management,” and the lengths people will go for a fancy [White House] address. … Irresistibly funny, the laughs come through scathingly cynical and far-too-honest writing, as well as brilliant comic timing. … A creatively notable piece of musical theatre that’s hilarious to boot. … When the ballots are in, and the papers counted, Vote For Me is a clear winner.”
http://gingerhibiscus.com/review-vote-for-me-at-the-london-theatre-workshop/

London Theatre 1:
“Five Stars. At the end of the evening the audience votes for the winner…one thing we all agreed on was how great the show was.”
https://www.londontheatre1.com/news/106858/uk-premiere-of-american-musical-vote-for-me-a-musical-debate/

Mark Shenton, The Stage:
“I vote that you give this sweet-natured production a chance.”
https://www.thestage.co.uk/reviews/2015/vote-musical-debate/?utm_content=buffer4c222&utm_medium=social&utm_source=twitter.com&utm_campaign=buffer

Everything Theatre:
“Four Stars. A fun musical that manages to make some serious points along the way…Vote For Me was the ideal vehicle for an irreverent look at the uniquely American approach to politics…Sharply observed lyrics and a wonderful cast.”
http://everything-theatre.co.uk/2015/05/vote-for-me-london-theatre-workshop-review.html

UK Theatre:
“Four Stars. Dom O’Hanlon effortlessly directs this fast-paced musical satire with an outstanding cast…The lines and lyrics by Drew Fornarola and Scott Elmegreen are intelligent and witty, hitting at the core of U. S. political culture. Don’t miss this laugh-out-loud funny satire about U. S. politics.”
http://www.uktheatre.net/magazine/read/vote-for-me—a-musical-debate-at-the-london-theatre-workshop_2737.html

Love London Love Culture:
“A sharp and satirical show, it is also an important one that really helps people to engage with the topic of politics.”
https://lovelondonloveculture.wordpress.com/2015/05/09/vote-for-me-london-theatre-workshop-review/

Mrs. Valjean:
“A terrifically witty musical satire which manages, in 90 minutes, to summarise all the key features of American politics – and American life – and to demonstrate what’s the true key to political engagement: write some great songs and throw in a tap dance routine.”
https://mrsvaljean.wordpress.com/2015/05/09/welcome-to-americas-first-woman-president/

The Bardette:
“A thrilling evening of musical politics where the audience are given the power to decide the outcome…a fabulously witty production brought to life with an incredible cast. ”
http://thebardette.co.uk/vote-for-me-london-theatre-workshop/

TheaterMania, Peter Filichia:
“Believe me, I’ve cried many times in the theater, from empathy for Laura’s devastation in The Glass Menagerie to joy for Dolly’s homecoming. But never before have I wept because I saw in no uncertain terms how blasé we’ve become about our right to choose our leaders…thank you, Messrs. Elmegreen and Fornarola, for reminding us.”

Nite Life Exchange, Rob Lester:
“The chicanery and doublespeak and manipulation and basic stupidity known as American politics would shrivel up and beg for mercy under the glaring light of the wit and skewering satire by the writers and performers in Vote for Me: A Musical Debate. It’s pretty darn funny and right on the money… [Drew Fornarola and Scott Elmegreen] are wiseguys of the best kind.” – http://www.nitelifeexchange.com/review/theatre/1427-d-for-diversity-at-nymf-dealing-with-dazzling-dances-debates-and-a-don-juan-sort-of-.html